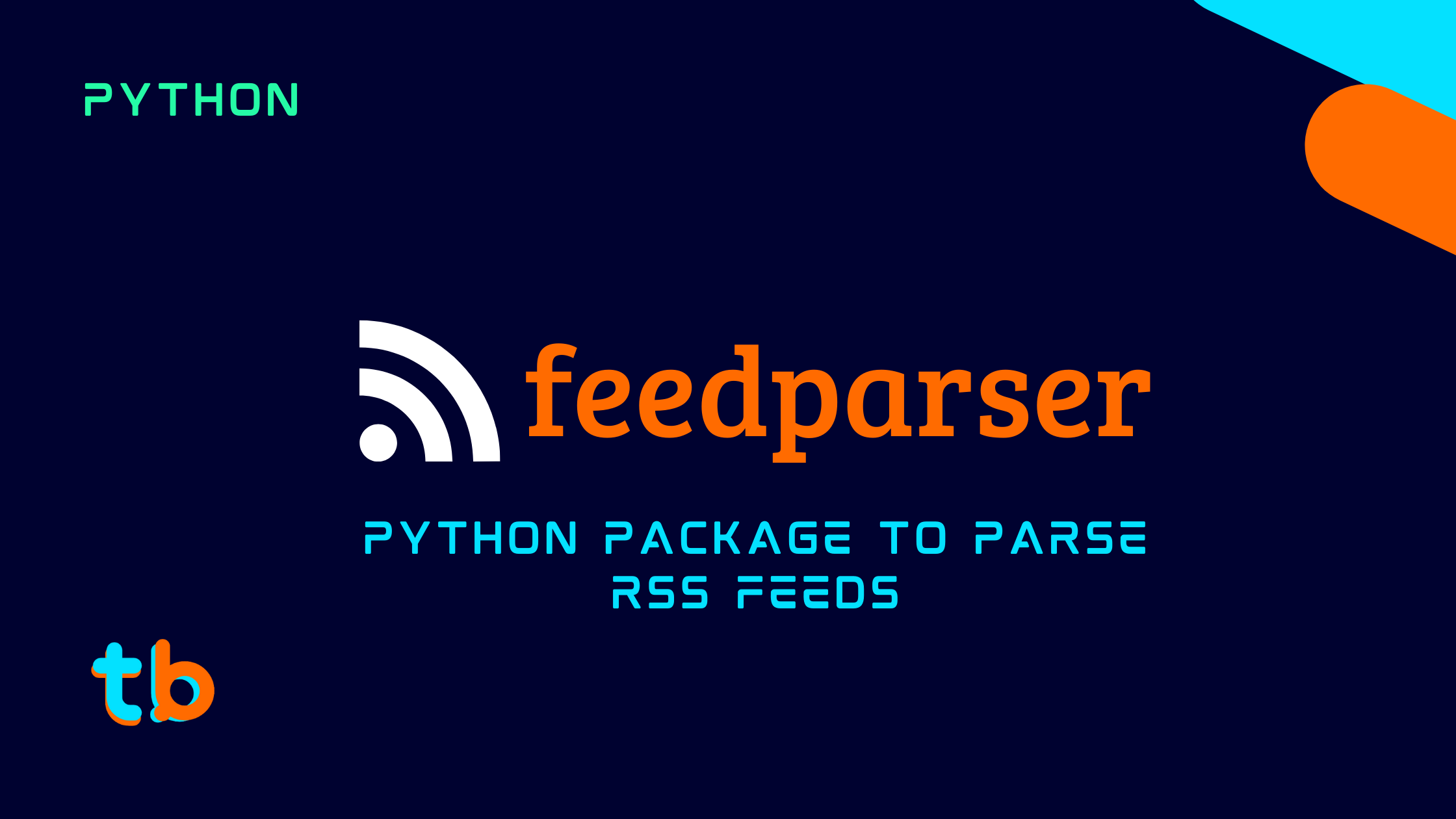 Feedparser is a simple but powerful python package that can be used to extract information about a specific webpage or a publication with its RSS feed(not only RSS). By providing the RSS feed link, we can get structured information in the form of python lists and dictionaries. It can be basically used in a pythonic way to read RSS feeds, it is really simple to use and it even normalizes different types of feeds.

Today, we will be taking a look at the feedparser package in python and how to extract information from a given RSS feed.

Feedparser is a python package for parsing feeds of almost any type such as RSS, Atom, RDF, etc. It is a package that allows us to parse or extract information using python semantics. For example, all the latest posts from a given blog can be accessed on a list in python, further different attributes like links, images, titles, descriptions, can be accessed within a dictionary as key-value pairs.

As feedparser is a python package you can install it with pip very easily.

To test out feedparser, you can open up a python repl, in the environment where you installed the Feedparser package.

Now, we can use the module in our application to get all of the functions or methods from the package.

To parse an RSS feed link, we can simply use the parse function from the feedparser package. The parse function takes in a string that can be a URL or a file path. Generally, the URL seems to be more useful. So, we can look up any RSS feed on the internet like your blog's feed, publications feeds, and so on.

The parse function basically fetches the feed from the provided URL or the file. It extracts the feed in a systematic way storing each piece of information in a structured format. At the high level, it returns a dictionary with a few key-value pairs. Further, each key might have a list or nested dictionaries in it. The key identifiers are named in a uniform manner for any feed you parse in the function. Though there might be a few cases where there might be additional information to be parsed, it can even add more information ad shape the structure accordingly.

This will give you a dictionary in python, that can have more or less similar keys. The most common keys that can be used in extracting information are entries and feed . We can get all the keys associated with a feed that is parsed using the keys function.

The keys function basically gets all the keys in the dictionary in python.

This will give out a list of all the keys in the feed which we have parsed from the RSS feed previously. From this list of keys, we can extract the required information from the feed.

Extract the contents from the feed

Now, we have the dictionary of the feed, we can easily access the values from the listed keys. We can get the list of all the posts/podcasts/entries or any other form of content the feed is serving for from the entries key in the dictionary.

To get more information and the most possible keys in the returned dictionary, you can refer to the feedparser reference list

To access the articles from the feed, we can access those as a list of the articles. Using the entries key in the dictonary as follows:

If you have already defined a variable set to the parse function, you can use that for more efficient extraction.

Get Number of Articles/Entries from Feed

To get the number of entries in the list, we can simply use the len function in python.

This gives us the number of entries in the provided feed. This is basically the list that stores all the content from the publication/website. So, we can iterate over the list and find all the different attributes we can extract.

Get details of the entries from the feed

To get detail information about a particular article/entry in the feed, we can iterate over the feed.entries list and access what we require.

So, we will iterate over the entries and simply print those entries one by one to inspect what and how we can extract them.

It turns out that every entry in the list is a dictionary again containing a few key-value pairs like title , summary , link , etc. To get a clear idea of those keys we can again use the keys function in python.

Though this might not be the same for all RSS feeds, it might be very similar and a matter of using the right keyword for the associated keys in the list of dictionaries.

Let's say, we want to print out the titles of all the entries in the feed, we can do that by iterating over the entries list and fetching the title from the iterator as entry.title if entry is the iterator.

Similarly, we will get the links of the entries using the link key in the dictionary.

Get information about the Website/Publication

To get the metadata about the information you are extracting from i.e. the website or any publication, we can use the key feed . This key stores another dictionary as its value which might have information like title , description or subtitle , canonical_url , or any other data related to the website company.

Using the keys like title , links , subtitle , we can get the information on the website/company level and not related to the specific post in the entries list.

You can further get information specific to your feed.

Checking for keys existence in the dictionary of feed

We also need to check for the existence of a key in a dictionary in the provided feed, this can be a good problem if we are parsing multiple RSS feeds which might have a different structure. This problem occurred to me in the making of podevcast where I had to parse multiple RSS feeds from different RSS generators. Some of the feeds had the cover image but most of them didn't. So, we need to make sure we have a check over those missing keys.

As we can see here, the image_url will pick up the image key in the dictionary if it is present else we will assign it to another URL which is the website/podcast cover image. This is how we handle exceptions in providing the keys when there are multiple feeds to be extracted though they are quite similar, they will have subtle changes like this that need to be handled and taken care of.

From this little article, we were able to understand and use the feedparser Python package which can be used to extract information from different feeds. We saw how to extract contents for the entries, a number of entries in the feed, check for keys in the dictionary, and so on. Using Python's Feedparser package, some of the projects I have created include:

For further reading, you can specifically target a feed type by getting the appropriate methods from the feedparser documentation

Thank you for reading, if you have any suggestions, additions, feedback, please let me know in the comments or my social handles below. Hope you enjoyed reading. Happy Coding :)

Crossposting with a single script: Crossposter.sh